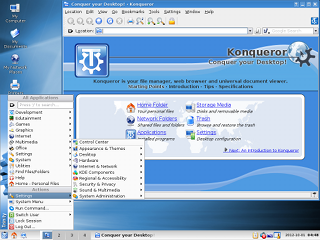 Almost a year in development and testing, this stable release update is comprised of 141 bug fixes and 1,193 patches. This new release does not introduce new features but is focused on stabilizing the 3.5.13 release. It should be a smooth update for everyone currently using TDE v3.5.13.

Bug fixes for the desktop, the TDE Menu, and many other applications have been included. Additionally, localizations for many languages have been improved. To learn about the highlights of this release, visit its information page.

Premade binary packages have been made available by our contributors for Debian Squeeze; Ubuntu Lucid, Maverick, Natty, Oneiric, Precise; Fedora 15, 16, 17; RedHat Enterprise/CentOS 5, 6; Mandriva 2011; Mageia 2; openSUSE 12.2; and Arch. You can find these packages and more at our homepage, http://www.trinitydesktop.org/.

You too can join the community! Help support our desktop and what we do by joining the mailing lists, and get user support from others like you! The lists are available here. Help is always welcome!

Creating TDE requires significant computing resources and bandwidth; please consider helping to keep us online with a donation on our Donations page!

The TDE project began as a continuation of the K Desktop Environment (KDE) version 3. The name Trinity was chosen partly because the word means "three" and TDE was formerly a continuation of KDE 3. Now its own desktop environment project, it continues to gain features, fix existing bugs, and provide a stable desktop to all.

The TDE project was founded by and is still led by Timothy Pearson. Timothy is an experienced and skilled software developer and was the KDE 3.x coordinator of previous Kubuntu releases.